The names on the Kaiparoro bridge (1)

The first name under 1914-1918 on the memorial plaque (and top right on the outside of the bridge) is that of V. A. Falkner.

Victor Andrew Falkner was born on 21 September 1893, one of 12 children to Alfred and Eliza Falkner, of Kaiparoro, Eketahuna. He went to Kaiparoro primary school and worked in his father’s timber mill. He enlisted on 15 December 1914 with the Auckland Mounted Rifles and was reported missing on 28 August 1915, aged 21, at Gallipoli, Turkey. A Board of Inquiry in October decided it was “reasonable to suppose dead”. His name is on the Hill 60 (New Zealand) Memorial, Hill 60 Cemetery.

The name beneath his on the plaque (and above his on the outside) is that of J.H. Snell.

John Harold Snell was born on 15 January 1893 to Edward and Harriett Snell. He was a cheesemaker and enlisted on 11 February 1915 with the New Zealand Engineers. At the time, he was single, but he married Ysabel Hannah Tryphena Snell, nee Emslie, in England in March 1916.  He survived Gallipoli but was killed in action on 3 January 1918, aged 24. He is buried in the Lijssenthoek Cemetery in Belgium. This is John Snell's entry on the Online cenotaph database.


On 12 August 2014, his name was among those read out in the Tower of London’s nightly roll call, during the playing of the Last Post, to commemorate the outbreak of World War One. This was organised by a descendant, Renny Snell, now living n England who submitted his name, (The newspaper article also notes that "John Harold Snell is the uncle of Olympic and Commonwealth gold medallist Peter Snell, who visited the Anzac Bridge in 2007 to pay tribute to his Uncle Jack".) 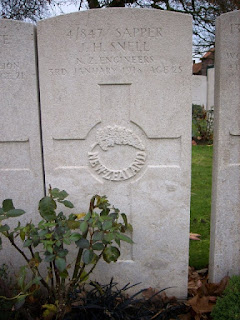 The third name on the plaque is that of A. Braddick.

Arthur Lock Braddick was born in Woodville on 18 January 1890. He was a farmer at Waiwaka, Eketahuna and enlisted on 7 February 1917 with the Canterbury Infantry Regiment. He married Madeline Henson at Mt Bruce in March and sailed from Wellington in August 1917. His daughter Joan Madeline was born in December 1917. Arthur Braddick was killed in action on 29 September 1918 and he is buried at Fifteen Ravine British Cemetery Villers-Pouich in France. This is  Arthur Braddick's entry on Online cenotaph.

I found some poignant articles in the Wairarapa Daily Times about Arthur Braddick: one from 21 July 1917 celebrating his going, the other on 19 October 1918 mourning his death,