More about Anzac Day at Kaiparoro: "it' s just such a lovely spot."

Why the Anzac Day at Kaiparoro is special:


At yesterday's service, the Deputy French Ambassador, Clarisse Gerardin, gave a very moving speech about how her family had been caught between the front lines in World War One  and eventually had to be rescued by the Red Cross and relocated to Switzerland. When they finally returned to their farm, it was to find the land almost unrecognizable. For years they worked at restoring it, but they were constantly ploughing up remnants of old shells and even mangled human bodies.

The service was also extra special this year for the new links forged between the bridge communities at Kaiparoro and Brooweena.

There's a lovely article about the bridge here. It makes the point that the Anzac memorial bridge is the country's only bridge built specifically as an Anzac memorial. It also has some wonderful family photos, including postcards sent home by Charles Harvey, some of which were read out at the Anzac Day service by a representative from his family.

Only one of the WW1 soldiers commemorated on the bridge, Arthur Braddick, left any direct descendants. His granddaughter said: "I think it's just such a lovely spot, if you stand on the bridge and look down the valley you can see the land Arthur was brought up on, and left from... it's really beautiful." 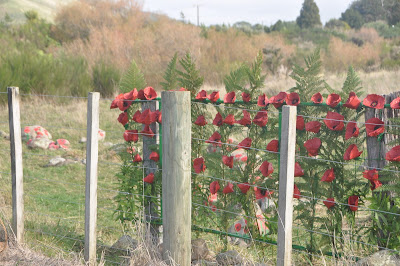