The names on the Brooweena bridge (3) 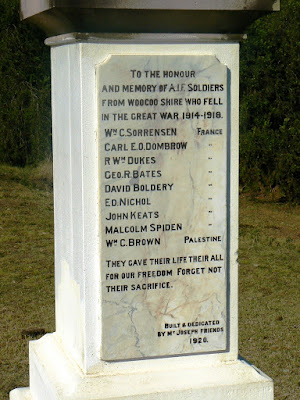 The seventh name on the Brooweena memorial is that of John Keats. (This was another name that took some finding, as it was spelt wrong.)


John Keates was born in London, England. He was a stockman and draughtsman and enlisted in Maryborough on 20 September 1916, aged 31. His next of kin was his sister Charlotte in England. John Keates was awarded the Military Medal “for bravery in the field”. He was killed in action on 19 October 1917 in Belgium. His name is on the Ypres (Menin Gate) Memorial.

The eight name is that of Malcolm Spiden.

Malcolm Tait Spiden was born in Thinoomba (east of Brooweena) to Robert and Margaret Spiden and went to Thinoomba State School. He was a stockman and enlisted at Maryborough on 17 October 1916 with the 47th Australian Infantry Battalion. Malcom Spiden arrived in France in August 1917 and was killed in action on 12 October 1917, aged 24. He is buried at Buttes New British Cemetery, Polygon Wood, Zonnebeke, Ypres, Flanders, Belgium. His headstone says: “In lasting memory of the 5th son of Mr and Mrs Spiden”. A brother, Charles, also went to the war in August 1916 but returned in May 1919.

The ninth and last name is that of  Wm. C. Brown.

William Charles Brown was the son  of Alfred and Elizabeth Alice Brown of Gayndah, Boompa, Queensland. He served with the Australian Light Horse and died of malaria  on 3 November 1918, aged 28. He is buried at the Kantara War Memorial Cemetery, Egypt.